Supercapacitors: They’ll enable you to charge your cell phone in 5 seconds, or an electric car in about a minute. They’re cheap, biodegradable, never wear out and as Trace’ll tell you, could be powering your life sooner than you’d think.

Read More:
“See The Scientific Accident That May Change The World (Or At Least Your Battery Life)”

“Why aren’t we powering everything with tiny, fast, biodegradable “batteries”?”

Geoscientists in Perth have discovered gold particles in the leaves, twigs and bark of eucalyptus trees, claiming a “eureka” moment which could revolutionise gold mining.

CSIRO researchers believe the trees, sitting on top of gold deposits buried deep underground, suck up the gold in their search for moisture during times of drought.

“We weren’t expecting this at all,” Dr Melvyn Lintern, a research geochemist at the CSIRO and the study’s lead author, said.

“To actually see the gold particles in the leaves was quite a eureka moment for us.”

Dr Lintern said the trees appear to be telling scientists what is happening under the earth’s surface.

“The particular trees that we did the research on appear to be bringing up gold from a remarkable 30 metres depth, which is about the equivalent of a 10-storey building,” he said.

The research group used the CSIRO’s Maia detector for x-ray elemental imaging at the Australian Synchrotron in Melbourne to analyse extremely small particles at high resolution.

The portions of gold are about one-fifth the diameter of a human hair. Dr Lintern said even 500 trees growing over a gold deposit would only yield enough gold for a wedding ring.

The researchers said they have also found gold in the leaves of other trees, such as the Acacia mulga.

“We’ve actually found gold not only in trees but in shrubs that are growing beneath the trees as well, so (it is) not restricted to any particular trees at all,” Dr Lintern said.

The discovery, the first of its kind in the world and the first time gold particles have been found in living material, will undoubtedly generate huge interest from within the gold mining and exploration industry.

“A lot of this stuff has been speculated about for some time, but the identification of the gold particles in the leaf materials is completely convincing and very, very important for the future of mineral exploration,” said Mr Radford, who has worked in mineral exploration his entire working life, most recently with US-based Newmont, one of the world’s biggest gold mining companies.

Mr Radford believes it has the potential to make gold exploration much quicker and cheaper.

“Ideally, any mineral exploration team would like to collect their samples on-surface,” he said.

“If you can sample on-surface, it saves all the cost and all the time involved in drilling holes.”

AUDIO: CSIRO researchers find gold particles in the leaves of Eucalyptus trees. (AM)

I started 2 weeks ago taking Iodine drops daily (along with spirulina)…and (after the initial detox symptoms) WOW, what a difference!!! More energy, clearer thinking, better sleep @ night and less of a need to sleep in, better circulation, & these are only a few of the benefits i can think of right now…I suggest making the trip to your nearest health food store ASAP!!

Executive Order, number 13037 issued in 1997 by President Clinton can be found in Volume 62, No. 44 at the Archives of the Federal Registry. Also see below.

To view how the Federal Government defines YOU, see Sec. 2 (b) below.

Click here for the legal definition of capital. Yep, you read it right. The Federal Government has legally and publicly declared the people of the United States to be their property; the property backing the Federal budget. (This is separate from the birth certificate bonds.)

Even with 100 reasons to meditate, this is quite Concise!

The Symbolism Hidden Within “THE WIZARD of OZ”
~ author unknown 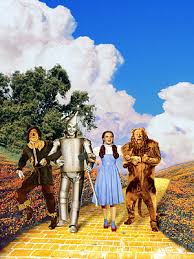 The “Wizard of Oz”, written by L. Frank Baum, is not a mere child’s story.

What is measured in ounces?

What is the yellow brick road?

Bricks or ingot bars of gold.

The character known as the Straw Man represents that fictitious, ALL CAPS, legal fiction – a PERSON, the Federal U.S. Government created with the same spelling as your birth name.

Remember what the Straw Man wanted from the Wizard of Oz?

A Brain! No juristic person – legal fiction – paper corporation has a brain because he/she has no breath of life.

What did he get in place of a brain?

A certificate: a Birth Certificate for a new legal creation.

He was proud of his new legal status, plus all the other legalisms he was granted. Now he becomes the epitome of the brainless sack of straw who was given a certificate in place of a grain of common sense.

Now, what about the Tin Man?

Does Taxpayer Identification Number (TIN) recall anything to mind? The poor TIN Man just stood there mindlessly doing his work until his body literally froze up and stopped functioning.He worked himself to death because he had no heart nor soul.

He’s the heartless and emotionless creature robotically carrying out his daily task as though he were already dead.  He’s the ox pulling the plow and the mule toiling under the yoke. These days, his task masters just oil him nightly with beer and place him in front of a hypnotic television until his very existence no longer has any meaning or value. His masters keep him cold on the outside and heartless on the inside in order to control any emotion or feeling that might arise.

The Cowardly Lion was always too frightened to stand up for himself. Of course, he was a bully and a big mouth when it came to picking on those smaller than he. (Have you ever noticed how bullies are really the biggest cowards? They act as though they have great courage, but, in reality, have none at all. They roar, but with no teeth of authority to back them up.) When push came to shove, the Cowardly Lion always buckled under and whimpered when anyone of any size or stature challenged him.  He wanted courage from the Grand Wizard, so he was awarded a medal of “official” recognition. Now, although remaining a coward, his official status allowed him to be a bully, but with officially recognized authority. (He’s not unlike the Attorneys who hide behind the Middle Courts of the Temple Bar.) et al ad infinitum.

What about the trip through the field of poppies?

Did you notice how this had no narcotic effect on the Straw Man (no brain) or the Tin Man (no heart or soul)?  They weren’t real people, so drugs could not influence them.

The Wizard of Oz was written at the turn of the century, so how could the author have known America was going to be drugged?

The Crown has been playing the drug cartel game for centuries.

Just look up the history of Hong Kong and the Opium Wars.

The Crown already had valuable experience conquering all of China with drugs, so why not the rest of the world?

What was the Emerald City?

Who finally exposed the Wizard for what he really was?

Toto, the ugly (or cute, depending on your perspective) and somewhat annoying little dog. Toto means “in total, all together; Latin in toto.”

What was it that the witch wanted after she alleged that the little dog had bitten her?

TOTO. … everything. Notice how Toto was not scared of the Great Wizard’s theatrics, yet he was so small in size, compared to the Wizard, that no one seemed to notice him?

The smoke, flames and holographic images of Oz were designed to frighten people into doing as the Great Wizard commanded.

Toto simply padded over, looked behind the curtain (the COURT, etc.), saw it was a scam, started barking until others paid attention to him and came to see what all the barking was about. Who was behind the curtain?

Just an ORDINARY PERSON controlling the levers that created the illusion of the Great Wizard’s power and authority.

When Toto pulled back the curtain and completely exposed him, the charade was at an end. (The veil hiding the corporate legal fiction and its false courts was removed.)

The Wizard’s game was UP. What was he after all?

We can see, in this tale, just how loud the bark from a little dog can be.

How about YOUR bark? How big is it?

Most of us remain silent and wait to be given whatever food and recognition, if any, by our legal master.

Let us not forget those pesky flying monkeys. What perfect mythical creatures to represent the Bar Association Attorneys who attack and control the little people for the Great Crown Wizard, the powerful and grand Bankers of Oz: GOLD!

How, finally, was the evil witch destroyed?

How, at last, did Dorothy get home?

She simply clicked her heels. She always had the power, and SO DO WE!

What would it take to expose the Wizard for what he is, tearing away his veils?

We each need only a brain, a heart and soul — and COURAGE.